Shot, but later deleted from the film was a 6 to 7 minutes sequence in which the scientist Seth Brundle attempts to re-create the accident with his teleportation device that mutated him. He takes the surviving baboon from his earlier experiments in the film, and an alley cat that he found. Then tries to fuse the two together through his Telepods. But unlike his accident in which he in the fly were linked on a genetic level, the baboon and the cat become this hideously mutated two-headed creature. With the creature in obvious pain, Brundle picks up a pipe and proceeds to beat it to death. He then goes up to the roof of the building where he lives feels an excruciating pain in his side and attempt to climb down the wall but loses his grip. He didn’t slides down the wall and falls to the ground where a growth in his side appears. A mutated insect limb. Horrified, he tears it off.

Here are five facts about the scene:

Besides the fact, that it delivered to much gore too early in the film, the real reason it was cut was because test audiences could no longer sympathize with the character of Seth Brundle. At some point in this film our Protagonist becomes the Antagonist. And the problem with the film including this scene, was that you no longer cared about the suffering the main character is going through. It was pretty evident to the filmmakers as a result of the test screenings, but the movie was better off without it.

This sequence features a stage in Brundle’s transformation not seen in the final film. Makeup Artist Chris Walas and his team dubbed it “stage 4b”. Walas said in interviews That was actually one of his favorite looks of Jeff Goldblum in the film. Because it had a Jekyll and Hyde quality about it. It was the halfway point between who Seth Brundle was in the beginning of the movie and into the creature Brundlefly that he later transforms into.

Besides his cameo as the gynecologist, director David Cronenberg is the one wielding the pipe that kills the creature in this shot. 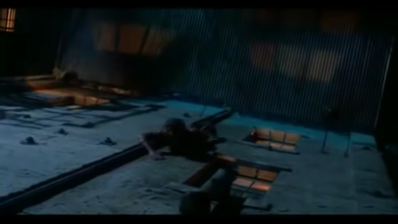 A large set of the warehouse wall was constructed for the shot where Brundle loses his grip and “slides” down the wall. To create this, the filmmakers made the wall slanted, like a slide so Goldblum could fall as well as give the illusion he’s sticking to it like a fly.

5. A shot from this deleted scene appears in the film’s original theatrical trailer.

The later stages of Jeff Goldblum’s transformation required over five hours of makeup and over five lbs. of prosthetics. 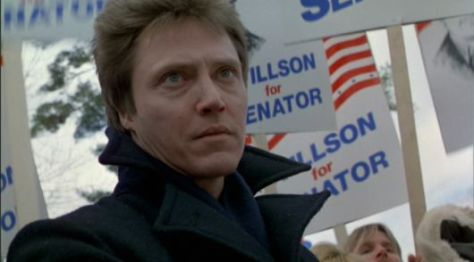 The filmmakers initially wanted the psychic visions that Johnny Smith (Christopher Walken) to have, should look sharp and painful. The character “jolts” as it happens. Walken wanted these “jolts” to look authentic. So director, David Cronenberg would fire a .44 Magnum pistol off camera and not tell Walken when it would go off.

The teleportation pods, or “telepods” as they’re called in the film are designed after the cylinder of a Ducati motorcycle. The film’s director David Cronenberg, is a collector of vintage motorcycles.